A chance sighting leads the Blakeleys on a journey to find the boat they always wanted.

Jerry and his wife, Yunie, were eating lunch at a waterside restaurant in Delray, Florida, in January 2013, when they spotted their dream boat — and lost her.

"My dream was to have a large cabin cruiser with a fly bridge," says Jerry, who began sailing 30 years ago and purchased his first twin-outboard power boat in 2000, when he was looking for a boat that required less physical work to navigate.

"I was concerned because all of the boats I saw with fly bridges required you to go down steps to the aft section of the boat and then walk along the side decks to get to the bow. I felt this was awkward; it would take my eye off where the boat was, and therefore was not safe for me," he adds.

But while boat-watching at lunch in 2013, he spotted a catamaran with an extended bridge and steps with a railing going directly from the helm on the bridge to the bow. Jerry and Yunie quickly finished their lunch, but by the time they got back out on the water, the catamaran was nowhere to be seen.

Jerry looked at boats for months afterward and finally found the catamaran he was looking for at the 2013 Palm Beach Boat Show: "An Aquila 38 was on the MarineMax stand. I fell in love with it — and purchased it on the spot!" he says.

Jerry and his wife had the Aquila 38 delivered to their Cape Cod home and wintered with it in South Florida, during which time he developed a close relationship with the MarineMax Aquila support team.

At the 2014 Miami Boat show, the Blakeleys fell in love with the Aquila 48 with four cabins. "The Aquila 48 was a big step up in spaciousness, comfort and design; I could not resist trading in my 38 for the 48," Jerry says. "We did a wonderful bareboat charter on the 48 in the BVI with MarineMax Vacations with two other couples. I spent the summer cruising to Martha’s Vineyard and Nantucket and then brought it down to West Palm Beach, Florida, for the winter."

In March 2015, Jerry fell in love again — and this time the boat, the Aquila 44, was just right. "Usually only my wife and I are cruising. A large master cabin and two cabins for guests is enough space," Jerry explains. "The accommodations are excellent for my wife and me as well as when we are accompanied by one or two other couples — or more, because some of our friends like sleeping on the bridge cushions or on the aft table which folds down and is topped by a cushion.

"Our friends and family are amazed at how spacious the Aquila 44 is. They are impressed with the two guest cabins," Jerry says. And when he first shows them the master cabin, they inevitably ask, "Why don’t you sell your house and live on this boat?!"

During the summer, Jerry keeps INTERLUDE docked at Oyster Harbors Island on Cape Cod and occasionally at a mooring in front of his house. In the winter, the boat is tied up at Palm Harbor Marina in West Palm Beach. "I like to have my coffee on the aft cockpit table or on the bridge in the morning, take my laptop or books out to the boat in the afternoon or enjoy cocktails and the sunset," he says.

During the winter months, Jerry and his wife have cruised across Florida on the St. Lucie Canal from West Palm Beach to Fort Myers and up the inland waterway to Clearwater, as well as down the east coast of Florida south of Fort Lauderdale. They have cruised three times to the Abacos Islands (Bahamas) and stayed over at Hope Town, Green Turtle, and Little Abaco, as well as Spanish Cay, Grand Cay and West End.

What else makes the Aquila 44 a great boat? Jerry explains:

Private Suite. The large master cabin has a king-size bed, a separate office area, and a large shower. The private suite has plenty of storage space: two tall closets, two storage compartments in the desk, storage under the bed, side tables and two large storage cabinets at the bottom of the stairs heading to the master head.

Social Aft Section. The aft deck features comfortable seats and a table as well as two bar stools in front of a huge window opening to the galley. This makes the model welcoming and social.

Main Salon. The compact galley features an electric Kenyon cooktop and combination microwave/convection oven, refrigerator and freezer, as well as plenty of storage. A large-screen TV is hidden above the wine cooler. The main salon has huge windows with blinds for shade and privacy.

The Bridge. The seating on the bridge is friendly, with large comfortable seats on either side of the helm seat; my wife and guests like curling up on these seats while I am at the helm. There is so much on the bridge: the barbecue grill and sink, as well as optional refrigerator and air conditioning. And the entire bridge area is surrounded by beautiful Lexan widows that open easily.

Engine Compartments. I am able to walk around the Volvo D4-300 horsepower diesel engines with easy access to filters and other items on my maintenance checklist. 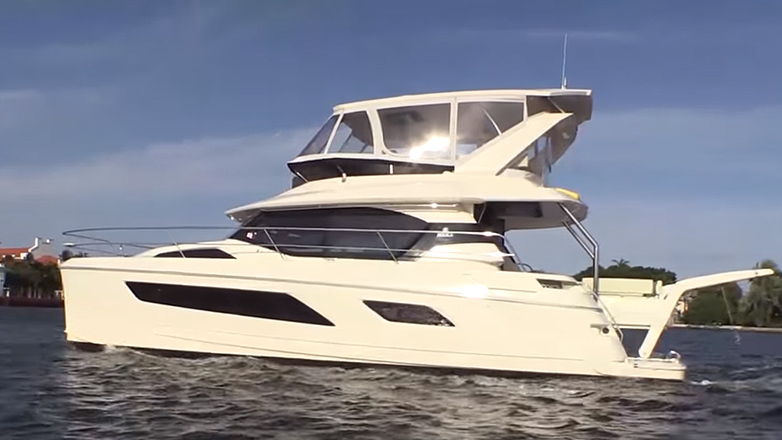 Play video for Tour of Interlude, an Aquila 44 Power Catamaran

"MarineMax and Aquila continued to improve on the previous models," Jerry says. "The Aquila 44 rides smoother and is more fuel efficient after some modifications. With the bow thruster built into the starboard bulbous bulb, I am able to get into tight spots, even coping with wind and current."

Bring the beauty of Aquila into your home and discover our models.
Submit Your Request

Explore our award-winning lineup ranging from 28 to 70 feet.
View Models